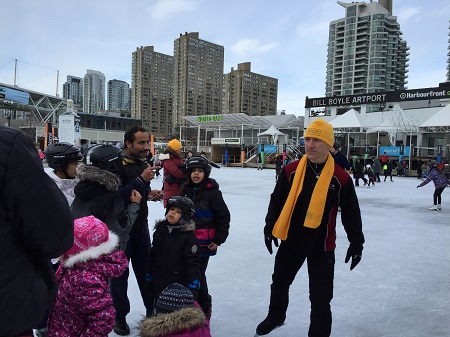 the world are more qualified than Elvis Stojko, three-time world champion figure skater. This was the scene at the “Welcome to Canada” skating party co-organized by The Second Cup Ltd. and CultureLink on Saturday Feb. 20, 2016 at Harbourfront. For the 135 Syrian refugees and 48 other newcomers that CultureLink brought to the party, it was almost too good to be true.

To add to the sweetness of the party, our event host and sponsor poured seemingly endless cups of scrumptious hot chocolate and served yummy chocolate cookies. “Many of us understand the challenges of adjusting to a new home and we hope that this event will make the transition a little easier for the newest members of our community,” said Vanda Provato, The Second Cup’s VP, Marketing. 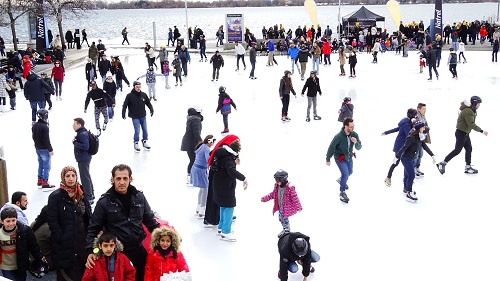 To me, it’s incredibly rewarding that one of CultureLink’s most innovative settlement programs, “Wintegration” (winter + integration) – which uses winter outdoor activities to help newcomers acclimate to the weather as well as to the culture – was endorsed and enjoyed on such a grand scale. Integration is a two-way process; it was heartening to see so many Torontonians, with different accents and different skin colours, turned out to welcome these new Canadians. Volunteers helped our newcomers to lace up and supported them on the skates. For many Syrians, this was their very first time ever standing on ice.

This was truly an eventful day: Elvis Stojko’s star turn, The Second Cup CEO’s charisma, our very own Syrian refugee-turned-volunteer, Mounir, who was a hot ticket for the media…., but the moment that moved me most was in the morning, when the long-anticipated buses gradually pulled in. I saw the kids’ excited faces at the windows. They waved hard at me and shouted in Arabic conveying an excitement that needed no translation. They looked different from a few days earlier when I’d met them in the hotel. There was the same level of restlessness, but what had been dull and irritated before, was thrilled and daring now. It brought tears to my eyes to see how happy they were to be at the party, to skate with other Canadians, old and new, and to pose with a Canadian icon on the 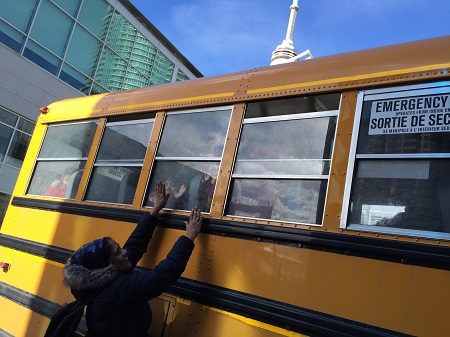 Two hours passed by like nothing and it was time for our guests to return to their hotel. When I took off the yellow hat and scarf that The Second Cup had given me and handed it to a refugee woman, her face lit up. “Thank you, thank you Canada!” she said. After they all boarded the bus, we stood by to see them off. Little kids again came to the windows to talk to us. They shouted, giggled, and kept blowing kisses from their chocolate-moustached mouths. Our volunteer Arshiah went closer to tap the window gently with open hands. The Syrian kids took turns patting their little hands onto hers – I bet they could feel her warmth despite the windowpane between them. A little, doll-like baby pressed her face against the window—her tiny nose was squished playfully and her eyes so pristine that you are only going to find a beautiful world inside. With a mesmerizing smile, she fastened her eyes upon me, melting my heart as the bus pulled away.

Little baby, I know it will not be easy for your careworn people to settle and integrate in a cold and unknown country. But you are in Canada now and, trust us, we will make you feel at home.