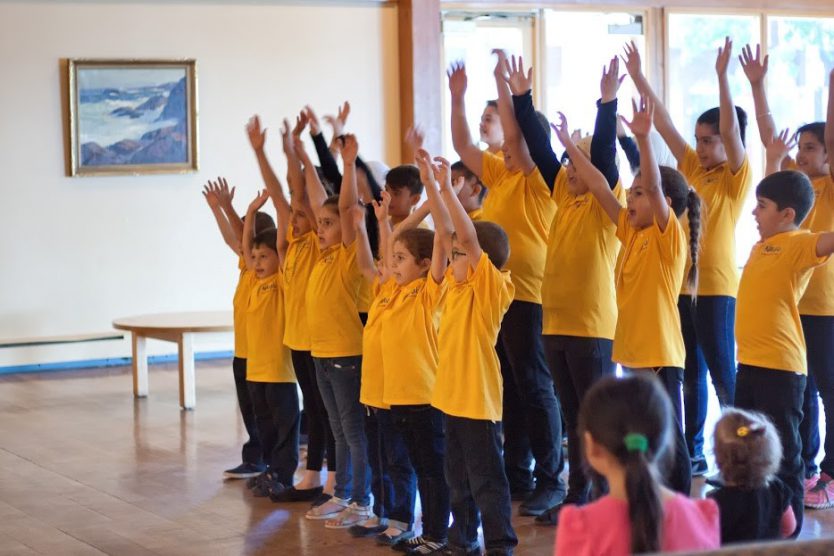 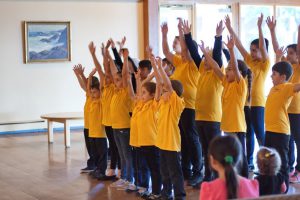 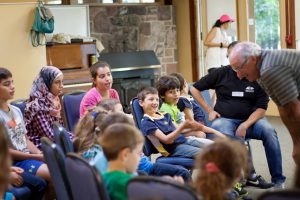 A worry-free retreat at a breathtakingly beautiful lake resort, precious family and community time by the campfire, quality music education and engaging activities provided on site for your children…. all these are probably of the often-taken-for-granted middle-class luxuries in Canada.  Is it ever possible for some newly arrived Syrian refugee families to enjoy such wonderful Canadian experience?

Summer 2016, the Nai Syrian Children’s Choir at CultureLink did not break for holidays. Our children and families are too new to the country to be left on their own. With a small one-time funding from Immigration Refugee and Citizenship of Canada, we carried out the activities throughout the summer to help our families learn English and about the life in Toronto.

By end of August, we had a stabilized choir made of 28 children from nine families and a Syrian refugee couple who volunteer as choir musicians. School would start soon and we were looking to organize a memorable event to close the summer. Our budget was so shy that initially we did not talk about anything really big and costly. Fei Tang, the choir’s founder, has two daughters who go to YMCA Geneva Park every year with their own choir for music retreats.  She fancied the same kind of retreat for Nai. But the idea cooled down fast upon checking the price. There was no way we could even remotely afford it. “But why don’t we give them a call anyway?” Fei suggested. So Nadeen Abu Shaban, the Choir’s Coordinator, reached out.

YMCA Geneva Park embraced us. From the first moment Nadeen talked to Alicia Noble, the manager there, we knew we’ve come to the right place to seek generosity, solidarity and the true Canadianness.  “We love to support you” she said warmly, “don’t worry about the budget.” And the same kind of genuine welcome we later had experienced with all YMCAGP staff throughout our stay there. Moreover, Orillia Vocal Ensemble, under the baton of Roy Menagh, quickly organized two groups of enthusiastic singers who came on both days, the September 10th and 11th, to help developing Nai children’s singing abilities.

Our 10 Syrian families had spent a beautiful weekend at YMCAGP and it happened to be the Eid holiday of Muslim people.  The retreat also successfully fulfilled its educational goal – we got our children well prepared for the two important performances that ensued in the following week. Now two months have passed and the weather is much colder now, but the warmth of the Geneva Park’s sunshine in the early fall can still be felt. Many families told us that’s the best weekend they had since they came to Canada.