The ‘Families & Educators for Safe Cycling’ program is part of the Bike to School Project, our award-winning cycling program developed with Cycle Toronto. It provides free Cycling presentations and resources to schools, through a dedicated team of volunteers. 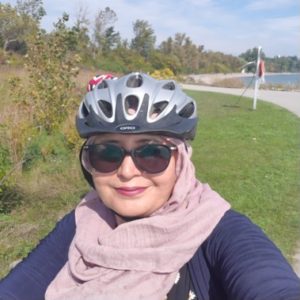 One of our great volunteers at CultureLink’s Sustainable Communities department is Najia Zewari. Like many of the members of the Women’s Wellness Cafe, she connected and learned how to cycle as an adult newcomer from Afghanistan. With the support from Evergreen Brickworks and CultureLink Bike Host program, she learned the joys of cycling for recreation and transportation. Last year she sent letters to the mayor and several councillors in support of the new bike lanes in Thorncliffe and Flemingdon. She’s also the peer leader of Women’s Wellness Cafe and founder of the Women’s Cyclist Network. She connected the group with local bike groups, including the Gateway Bike Hub, Cycle Don Valley Midtown (CDVM) and Marc Garneau CI. Later she was a panel speaker at a major conference on cycling in Toronto, was elected Ward Co-Leader of CDVM, and is helping run campaigns for safe cycling infrastructure in her area on Overlea Blvd and Don Mill Rd.

Making his Neighbourhood Safer for Biking 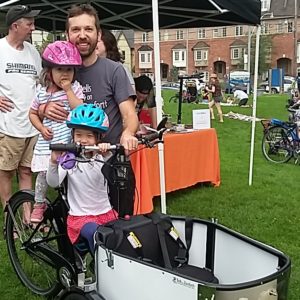 Tom Eminowicz started working with CultureLink’s Bike to School Project a couple of years ago when he decided he wanted to help make his neighbourhood safer and better for people to ride bikes. He lives in Toronto’s east end with his partner and two girls and they all use bicycles, including a family cargo bike with a big bucket for the girls to sit in while dad pedals. Tom has been working with our ‘Families and Educators for Safe Cycling’ program to engage his school community with the Danforth Complete Street project. He attends public meetings, speaks face-to-face with decision-makers, writes reports outlining key safety issues along the corridor, and sits on a working group of local supporters hand-picked by a Toronto city councillor to help make the project a success. Tom’s hard work is paying off, as the city just announced plans to implement protected bike lanes along Danforth Ave, right through his neighbourhood.