Some of our Community Connections Mentorship Program workers host the Citizenship Education Circle at different Toronto Public Library branches. This is a 10-week program where participants from around the world get together to learn about Canada, practice for the citizenship test, socialize and break the isolation of the winter months. Some joke that everyone is so bundled up, to battle the cold, that you do not recognize your neighbours until spring!

Each week, some participants join the group after work, others come from school or home. Some have already applied for their citizenship but have not yet received their test date. A few are still thinking of applying and join the class to see what it is like. Janet liked the class so much that she brought her children, Kenneth and Myriam, and all of them passed their citizenship test in December 2019.

Some participants come back even after they have completed the 10 weeks. They like the friendliness of the group, and the opportunity to socialize, continue to learn about Canada, improve their English and find more information about their community. Elaina, for example, used to bring all three of her children to the group, but now she leaves them with their grandmother. She told the group she made the change so that Tuesday nights could be for her (self-care).

Learning about each other

Sofia told us that when her children mentioned some famous Canadian inventors they didn’t know about, she was able to tell them who they were. She had learned about them from the Canada Discovery Guide and was proud to answer quiz questions she learnt from it.

Another participant, Elaine, arrived one day carrying a beautiful multilayer cake that she made. The sour cream cake was created from a Russian recipe that her mother-in-law taught her. She also told the group about the potato soup she shared at home with her new friend Maria (from the group), who is from the Philippines.

Christen is one of two mentors that facilitate the group and support the participant’s learning. Below is a photo of her and Elaina, from Georgia, presenting her sweet creation to the group last February. 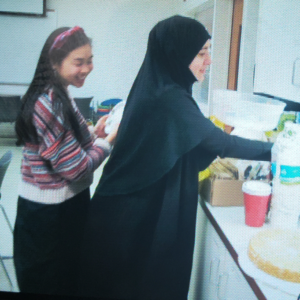 Sharing, caring and understanding each other helps unite a community, a town, a city and a country.

If you need a Citizenship Education Circle in your neighbourhood, please contact Lily at lkrowiak@culturelink.ca  or 416-588-6288, ext. 213